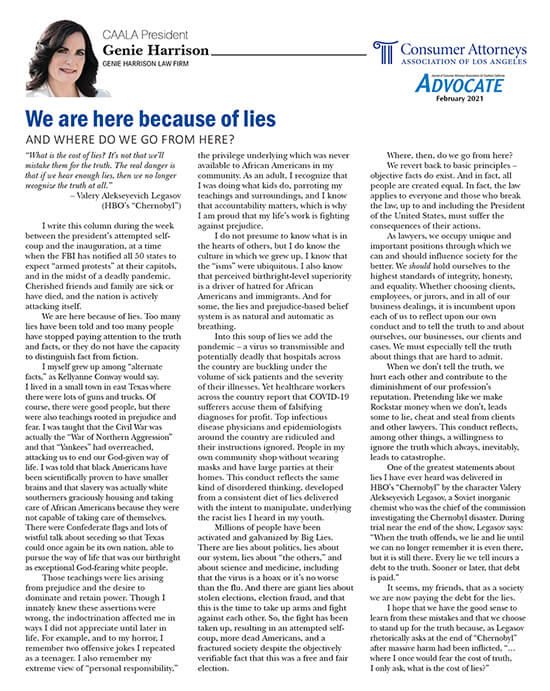 We are here because of lies

AND WHERE DO WE GO FROM HERE?

by CAALA President Genie Harrison for The Advocate, February 2021

“What is the cost of lies? It’s not that we’ll mistake them for the truth. The real danger is that if we hear enough lies, then we no longer recognize the truth at all.”

I write this column during the week between the president’s attempted self-coup and the inauguration, at a time when the FBI has notified all 50 states to expect “armed protests” at their capitols, and in the midst of a deadly pandemic. Cherished friends and family are sick or have died, and the nation is actively attacking itself.

We are here because of lies. Too many lies have been told and too many people have stopped paying attention to the truth and facts, or they do not have the capacity to distinguish fact from fiction.

I myself grew up among “alternate facts,” as Kellyanne Conway would say. I lived in a small town in east Texas where there were lots of guns and trucks. Of course, there were good people, but there were also teachings rooted in prejudice and fear. I was taught that the Civil War was actually the “War of Northern Aggression” and that “Yankees” had overreached, attacking us to end our God-given way of life. I was told that black Americans have been scientifically proven to have smaller brains and that slavery was actually white southerners graciously housing and taking care of African Americans because they were not capable of taking care of themselves. There were Confederate flags and lots of wistful talk about seceding so that Texas could once again be its own nation, able to pursue the way of life that was our birthright as exceptional God-fearing white people.

Those teachings were lies arising from prejudice and the desire to dominate and retain power. Though I innately knew these assertions were wrong, the indoctrination affected me in ways I did not appreciate until later in life. For example, and to my horror, I remember two offensive jokes I repeated as a teenager. I also remember my extreme view of “personal responsibility,” the privilege underlying which was never available to African Americans in my community. As an adult, I recognize that I was doing what kids do, parroting my teachings and surroundings, and I know that accountability matters, which is why I am proud that my life’s work is fighting against prejudice.

I do not presume to know what is in the hearts of others, but I do know the culture in which we grew up. I know that the “isms” were ubiquitous. I also know that perceived birthright-level superiority is a driver of hatred for African Americans and immigrants. And for some, the lies and prejudice-based belief system is as natural and automatic as breathing.

Into this soup of lies we add the pandemic – a virus so transmissible and potentially deadly that hospitals across the country are buckling under the volume of sick patients and the severity of their illnesses. Yet healthcare workers across the country report that COVID-19 sufferers accuse them of falsifying diagnoses for profit. Top infectious disease physicians and epidemiologists around the country are ridiculed and their instructions ignored. People in my own community shop without wearing masks and have large parties at their homes. This conduct reflects the same kind of disordered thinking, developed from a consistent diet of lies delivered with the intent to manipulate, underlying the racist lies I heard in my youth.

Millions of people have been activated and galvanized by Big Lies. There are lies about politics, lies about our system, lies about “the others,” and about science and medicine, including that the virus is a hoax or it’s no worse than the flu. And there are giant lies about stolen elections, election fraud, and that this is the time to take up arms and fight against each other. So, the fight has been taken up, resulting in an attempted self-coup, more dead Americans, and a fractured society despite the objectively verifiable fact that this was a free and fair election.

Where, then, do we go from here?

We revert back to basic principles – objective facts do exist. And in fact, all people are created equal. In fact, the law applies to everyone and those who break the law, up to and including the President of the United States, must suffer the consequences of their actions.

As lawyers, we occupy unique and important positions through which we can and should influence society for the better. We should hold ourselves to the highest standards of integrity, honesty, and equality. Whether choosing clients, employees, or jurors, and in all of our business dealings, it is incumbent upon each of us to reflect upon our own conduct and to tell the truth to and about ourselves, our businesses, our clients and cases. We must especially tell the truth about things that are hard to admit.

When we don’t tell the truth, we hurt each other and contribute to the diminishment of our profession’s reputation. Pretending like we make Rockstar money when we don’t, leads some to lie, cheat and steal from clients and other lawyers. This conduct reflects, among other things, a willingness to ignore the truth which always, inevitably, leads to catastrophe.

One of the greatest statements about lies I have ever heard was delivered in HBO’s “Chernobyl” by the character Valery Alekseyevich Legasov, a Soviet inorganic chemist who was the chief of the commission investigating the Chernobyl disaster. During trial near the end of the show, Legasov says: “When the truth offends, we lie and lie until we can no longer remember it is even there, but it is still there. Every lie we tell incurs a debt to the truth. Sooner or later, that debt is paid.”

It seems, my friends, that as a society we are now paying the debt for the lies.

I hope that we have the good sense to learn from these mistakes and that we choose to stand up for the truth because, as Legasov rhetorically asks at the end of “Chernobyl” after massive harm had been inflicted, “… where I once would fear the cost of truth, I only ask, what is the cost of lies?”