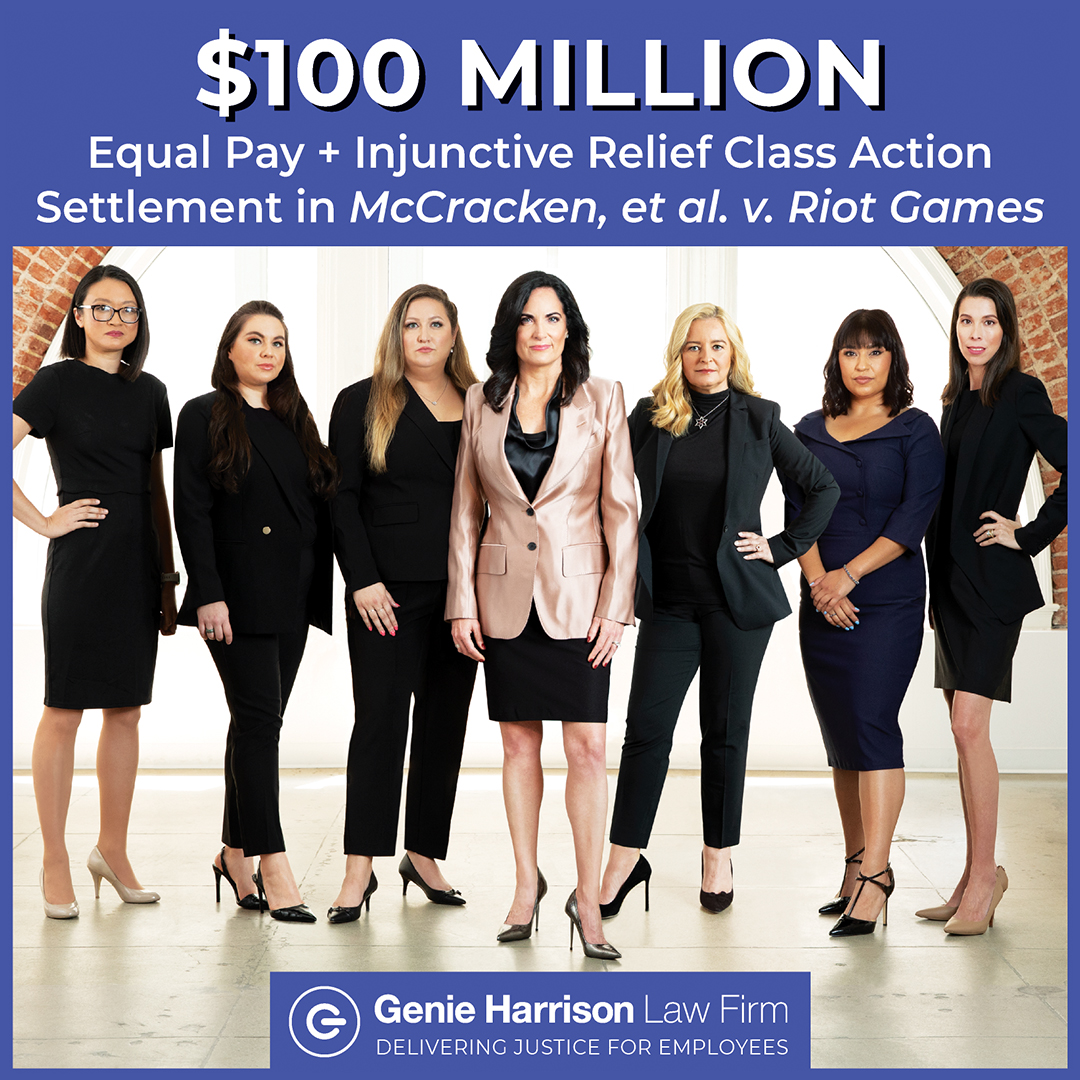 On December 27, 2021, the Plaintiffs in McCracken, et al. v. Riot Games, et al. filed a Motion for Preliminary Approval of a $100 million settlement plus major injunctive relief in their equal pay class action.

Congratulations to the WOMEN OF RIOT GAMES whose courage and commitment led to this result. Genie Harrison, Mia Munro, Andie Fields, Zenia Anderson, and Michelle Patino-Patroni from the Genie Harrison Law Firm, APC, and co-counsel Joe Lovretovich and Nick Sarris at JML Law, APLC, represent the Private Plaintiffs. DFEH and DLSE co-plaintiffs and their efforts played a significant part in this outcome.

The gender discrimination lawyers at the Genie Harrison Law Firm are committed to protecting equal pay for women in the workplace.

TELL US ABOUT YOUR CASE 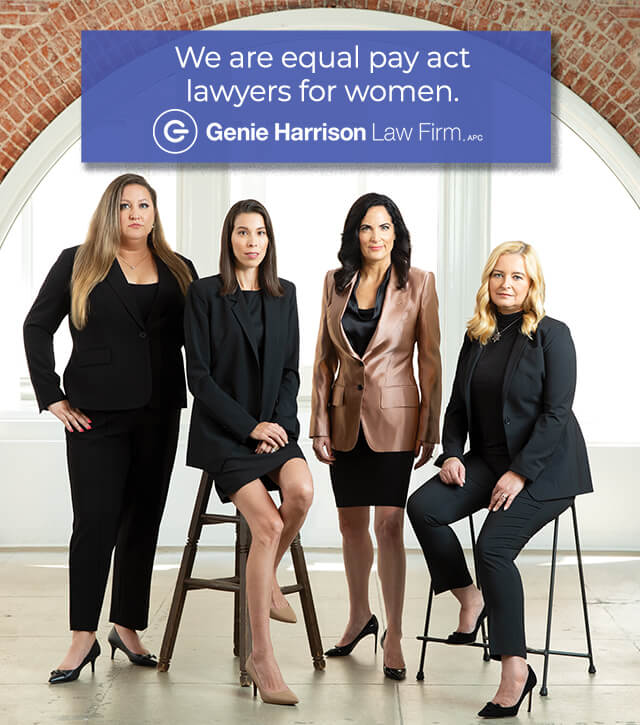 We Are Equal Pay and Gender Discrimination Lawyers

Our gender discrimination lawyers at the Genie Harrison Law Firm are leaders in fighting for equal pay for women.

THESE & ADDITIONAL STORIES IN OUR BLOG 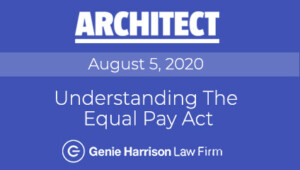 What is the Equal Pay Act?

With the ratification of the 19th Amendment, on August 25, 1920, women finally got the right to vote. But perhaps an even greater catalyst for gender equality was the introduction of women to the workforce.

Early wage-earning women began cutting a path towards independence in this nation’s long, and ongoing, fight for gender equality. Women who worked no longer had to rely solely on the financial support of their families or spouses. Women had the freedom to speak in their own voice, even if it contradicted the views of their parents or their husbands. With the means to support themselves, women’s fear of financial reprisal lessened and their influence on society grew.

As wage-earners, women became social and political contenders. And as a result, legislation supporting women in the workplace was passed, including the federal Equal Pay Act of 1963 (“EPA”). 29 U.S.C. §206. And for its part, California enacted its own equal pay statute, the California Equal Pay Act of 1949 (“CA EPA”). Cal. Lab. C. §1197.5.

However, despite this legislation, the wage gap persists. In 2017, women (regardless of race or ethnicity) still made only 80 cents for every dollar earned by male co-workers, and experts estimate that it will take until 2059 for women to close the wage gap. However, when accounting for race, the statistics are even worse. Black women will not see wage equality until 2119, and Hispanic women will be waiting until 2224.

The California Equal Pay Act of 2015

In an effort to close the wage gap and extend the CA EPA, California signed the California Fair Pay Act into law in 2015 and has continued to amend the law every year to offer even greater protection to working women. However, the EPA and the CA EPA remain aligned in many significant areas. Jones v. Tracy School Dist. (1980) 27 Cal.3d 99, 111.

The EPA and the CA EPA were political victories for gender equality and endeavored to further empower women by providing them with pay equal to their male counterparts. The simple principle of the EPA is that “equal work will be rewarded by equal wages.” S.Rep. No. 176, 88th Cong., 1st Sess., 1 (1963). In service of this principle, the EPA prohibits employers from discriminating against employees on the basis of sex by paying different wages for equal work requiring equal skill, effort and responsibility, and which are performed under similar working conditions. 29 U.S.C. §206(d)(1).

What is equal work?

Under the EPA, equal work does not mean identical work but “substantially equal” work. 29 C.F.R. §1620.11. An employer cannot hide behind job classifications and titles to prove that one employee’s work is different from another’s.

What Is Equal Effort, Skill, and Responsibility?

Equal skill is determined by looking at what kind of experience, training, education, and ability are used to perform a job. 29 C.F.R. §1620.15. Jobs requiring the same skill will meet the requirement of “equal skill” under the EPA even when one job requires the skill to be performed with greater frequency. 29 C.F.R. §1620.15(a). Further “equal skill” is determined by what the job requires, not by the skill possessed by one of the employees. Hein v. Oregon College of Ed. (9th Cir. 1983) 718 F.2d. 910, 914.

Equal effort is determined by the measure of physical or mental exertion needed for the performance of a job and encompasses the total requirements of the job. 29 C.F.R. §1620.16(a). When considering the total requirements of a job, the fact that different kinds of effort are required by similar jobs does not mean that the jobs require unequal effort. 29 C.F.R. §1620(b).

Do I Need to Prove Intentional Discrimination?

No. Unlike other anti-discrimination statutes (such as Title VII and the California Fair Employment and Housing Act), an aggrieved employee does not need to prove that the employer intended to discriminate against them on the basis of sex—the employee just needs to prove that they were paid less for similar work.

What are similar working conditions?

A determination of similar working conditions requires the examination of two subfactors: surroundings and hazards. Surroundings measure the elements (like toxic chemicals) regularly encountered by a worker, their intensity, and their frequency. Hazards examine physical hazards regularly encountered, their frequency, and the severity of injury they can cause. 29 C.F.R. §1620.18(a).

Difference in shifts, such as night versus day shifts, and minor differences in the surroundings and hazards of certain positions will not constitute different working conditions under the EPA. 29 C.F.R. §1620.18(b).

When can an employer pay different wages for the same work?

Employers are justified in paying different wages for similar work when the wage differential is due to:

(3) a system that measures earnings by quantity or quality of production; or

In California, the CA EPA includes the first three defenses but narrows the scope of the fourth defense to “a bona fide factor other than sex, such as education, training, or experience.” Cal. Lab. C. §1197.5(a)(1). And in order to rely on the fourth defense under the CA EPA, employers must show that the factor is not based on or derived from a sex-based differential in compensation, is job-related, and is consistent with a business necessity. Cal. Lab. C. §1197.5(a)(1)(D). Further, under the CA EPA, if an employee can show that there was an alternative business practice that would serve the same business purpose without producing a wage differential, they can defeat this defense proffered by an employer. Cal. Lab. C. §1197.5(a)(1)(D).

Can I ask co-workers about their wages to determine if there is a wage gap? 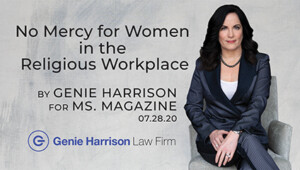 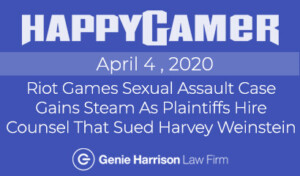 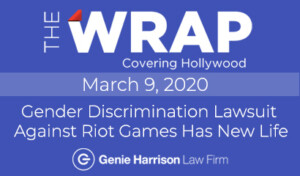 THE WRAP / 03.09.20
Gender Discrimination Lawsuit Against Has New Life

For a completely confidential consultation with an experienced labor and employment attorney, please contact us at (213) 805-5301 or use the email form below to provide us with a brief description of your case: