Updates: State Bar Seems Determined To Open The Practice Of Law To Non-Lawyers

by CAALA President Genie Harrison for The Advocate, September 2021

September is an important month for the State Bar’s ongoing efforts to open the practice of law to hedge funds, big accounting and tech, and corporations, and to create a new second-class licensure called paraprofessionals. The Paraprofessional Program Working Group (PPWG) will finalize its recommendations for starting the paraprofessional program, including education, licensing, and disciplinary regulations, and provide those to the State Bar Board of Trustees in September. The PPWG’s recommendations will include extensive proposed revisions to the Rules of Professional conduct to allow non-lawyers, including paraprofessionals, to share fees with lawyers. The Board of Trustees will meet and presumably approve the recommendations from the PPWG, and then will put the proposed program and rules out for public comment.

In the meantime, a separate Working Group, the so-called Closing the Justice Gap Working Group (CJGWG), will meet to outline the proposed statutory and regulatory changes it seeks to enable hedge funds, big accounting, big tech, and corporations, to practice law in California. Think Deloitte Law, Amazon Law, and Google Law. These companies have their eyes on what they consider to be the lucrative legal market. They intend to own both sides of the “v,” and will, among other things, set the levels of what counts as “fair compensation” to injured and harmed plaintiffs.

Shockingly, the State Bar is all for what it calls the “reregulation” of the practice of law – it claims that allowing corporations to practice law will increase access to justice and protect the little guy and gal. In the real world, we know that protecting the individual is precisely what never happens when business does what it is beholden to do, which is maximize its profits.

The State Bar’s drive to sacrifice the legal rights of California consumers in order to maximize corporate profits is nonsensical and difficult to imagine. Perhaps the State Bar is courting these corporate relationships precisely because its leadership realizes it has few friends among lawyers or legislators. Whatever the true motive, it’s crunch time and we need your participation in the resistance effort, especially at the Board of Trustees meetings on September 23-24, 2021.

Go to https://members.calbar.ca.gov/ lists/subscribe.aspx?l=board_agenda and subscribe to be notified about the Board of Trustees meetings, and https://board.calbar.ca.gov/Committees.aspx to subscribe to be notified about the PPWG and CJGWG Committee meetings. Attend the virtual meetings and make impactful two-minute comments against these programs. And when written public comment is called for beginning in September, do what lawyers do best – provide written opposition.

CAALA’s Virtual Mandatory Settlement Conference (MSC) platform, Resolve Law Los Angeles (RLLA), for cases in the PI Hub of LASC, is a success. Of course, the RLLA virtual program was developed in partnership with Association of Southern California Defense Counsel (ASCDC), LA-ABOTA, and Beverly Hills Bar Foundation, and we are truly grateful for those organizations’ steadfast commitment as justice partners.

Thanks to the generosity of plaintiff and defense attorneys, RLLA has hundreds of volunteer Settlement Officers donating their time in three-hour increments to help settle cases virtually. In its first month of operation, more than 70 cases were registered in the RLLA Virtual MSC program, 30 virtual MSCs took place, and about a dozen cases were settled.

At present, only cases that have been selected by a PI Hub judge and ordered into the PI MSC program are eligible for this terrific community service. However, ASCDC President- Elect Marta Alcumbrac, Civil Supervising Judge David J. Cowan, and I are discussing ideas about expanding the program to enable the parties to stipulate to participation. In the meantime, if you have at least 10 years’ litigation experience, please go to www.resolvelawla.com, register, confirm your account via the confirmation email you will receive, and then select dates on which you can volunteer as a Settlement Officer. Only by working together will we move cases forward to resolution and make way for trials in the cases that cannot be resolved.

Genie Harrison is the principal of the Genie Harrison Law Firm, where she focuses on plaintiff’s employment, civil rights and wage and hour matters. Ms. Harrison is one of only two women in the state of California named by the Daily Journal as a Top Labor & Employment Lawyer for five years in a row. She has been recognized by Best Lawyers in America for Plaintiff’s Employment Litigation and been named by the Daily Journal as one of the Top 100 and Top 75 Women Litigators in California. In 2014 she was elected as a Fellow of the College of Labor & Employment Lawyers. In 2013 Ms. Harrison received CAALA’s Presidential Award. 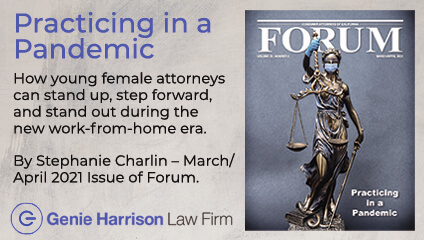