Amber Rose on Why SlutWalk is More Important Than Ever

Here is an excerpt:

This Saturday, thousands of women will march through downtown Los Angeles to Pershing Square to take a stand for gender equality; as with most feminist marches, there will be loud chants and witty signs. But this event will look a little different from the others: Marchers of all shapes and sizes will hit the streets in itty bitty bikinis, short-shorts, pasties, fishnets, lingerie, stripper heels and whatever else they feel like wearing. This is the Amber Rose SlutWalk and it’s a judgment-free zone, even if you show up fully dressed. Amber Rose, the woman behind the event, says, “You don’t have to wear pasties! We have zero tolerance for bullying or anything like that.”

Rose first became known as partner to Kanye West and then wife of Wiz Khalifa but has gone on to create a platform as an entrepreneur, model, activist and proud ex-stripper. She founded the Amber Rose Foundation to fight victim blaming and to promote equal rights, and the SlutWalk is a way to draw public attention to those issues. Marching in lingerie isn’t about being an exhibitionist, as some might assume — SlutWalk started as a response to people who try to blame sexual-assault victims by focusing on what they were wearing at the time.

Now in its fourth year, Rose’s SlutWalk has grown into a daylong event with speakers and live performances. “It’s not just a walk — we have a whole festival as well. You’re gonna cry, you’re gonna laugh. You’re gonna scream, maybe,” Rose predicts. “There are protesters outside, and you’re gonna be fuckin’ pissed. It’s a very emotional day, and amidst all the heavy trauma that we’ve been through, it’s a celebration for women as well. And it’s inclusive. We invite the LGBTQ community, nonbinary, whatever gender you identify with. Everyone is welcome.”

As a prelude to the big day, Rose partnered with Dr. Ange-Marie Hancock Alfaro, Dean’s Professor of gender studies and chair of gender and sexuality studies at USC, to host “OpenED: A Fireside Chat” at USC’s University Club on Tuesday. A panel of experts came together for a candid conversation about gender equality and social justice. Panelists included Nicole Beckett, co-founder of Sameside; Liz Havstad, executive director/chief operating officer of Hip Hop Caucus; Genie Harrison, a trial lawyer who represents victims of sex abuse, sexual harassment and retaliation; and Shafiqa Ahmadi, associate professor at USC and co-director of the Center for Education, Identity and Social Justice… 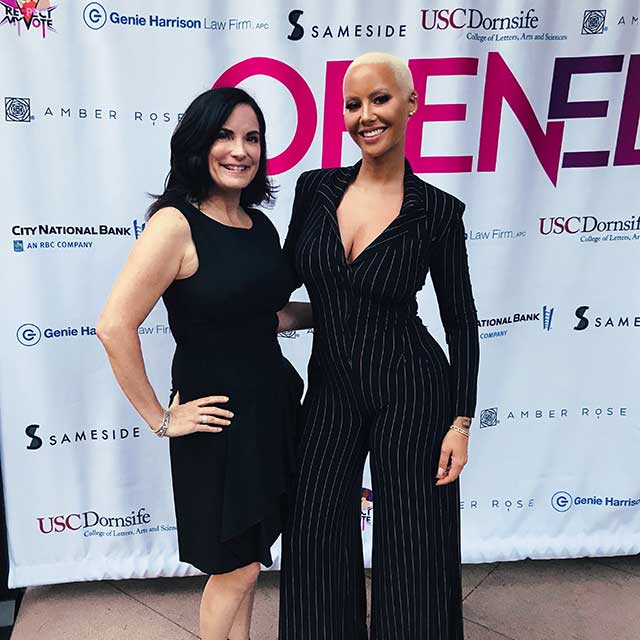